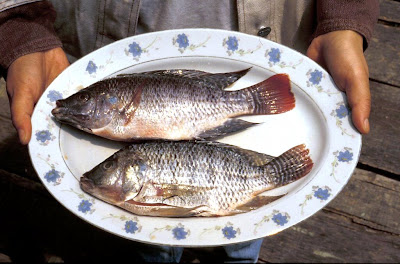 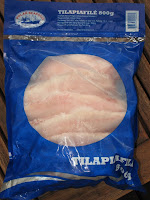 Prompted by reactions to an earlier post, here is the only fish recipe I have: fried fish. Not at all like deep-fried fish in fish’n chips, but could be a milanesa de pescado. This post is particularly suitable for all who do not know how to cook and need a very simple dish that is guaranteed to make a great meal. It works with most acanthomorphs, needing firm flesh; avoid cypriniforms an clupeiforms. First time I tried this procedure was in Lusaka, Zambia, with Oreochromis andersonii, probably the best tasting tilapia species, but should work with any tilapia anywhere.

In addition to fish fillets, you need 2-3 eggs, whisked to homogeneous liquid, about 2 dl of dried breadcrumbs, some salt, pepper if you like. Tilapia, cod, and many other fish do quite well without spices, but salt is recommended. Mix the salt with the breadcrumbs, do not apply on the fish. One kilo of fish is more than enough for a whole family of four.

1. Thaw the package. Takes the whole day, unless you use the defrost option of the microwave oven. 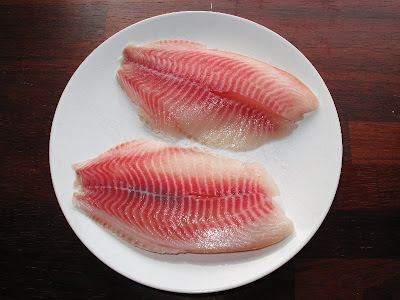 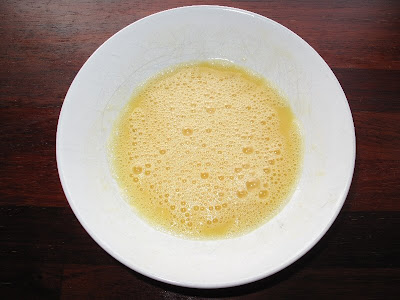 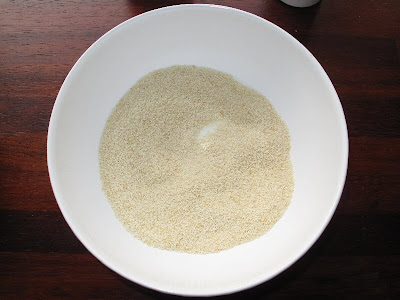 Breadcrumbs with some salt in 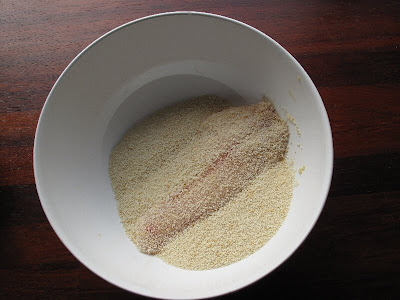 2. Immerse each fillet in the whisked egg.

3. Cover the fillet with breadcrumbs. 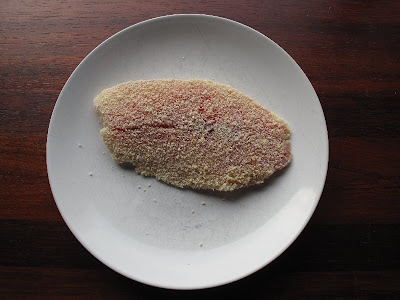 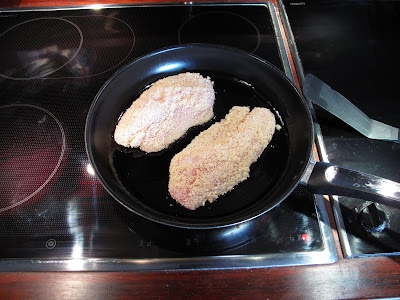 5. Locate oven, frying pan, and cooking oil/margarine (but butter is better). Heat the pan to about medium (6 on a scale to 10), apply oil to cover bottom of pan.

6. Put in 2 larger or 3 smaller fillets in the pan, leave for about two minutes or until a soft golden (not brown), then turn and fry on the other side and keep turning until both sides nicely golden. The cover absorbs the oil, so you probably need to add some for every turn.

7. Repeat 6 until all fillets fried. 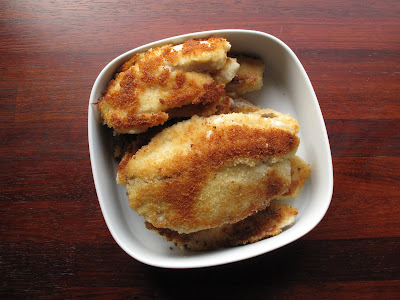 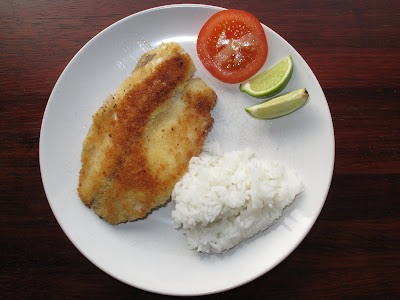 8. Serve with rice, potatoes, or whatever you like. Real men don’t eat tomatoes, though. Eat fresh. Re-heated it will be rather dry; restaurants usually mask dry fish with some sauce.

After a little like a week with family and friends in China, the image gallery consists not so much of fish. We passed through some food departments in malls, including enjoying a fish burger at KFC in Hefei that was excellently spicy, said to be from pike, but was perhaps not a fish dish. 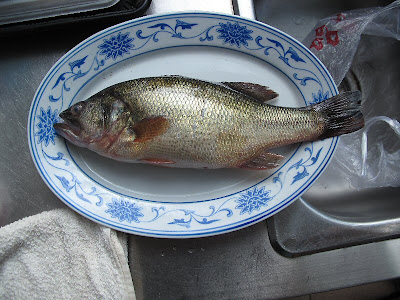 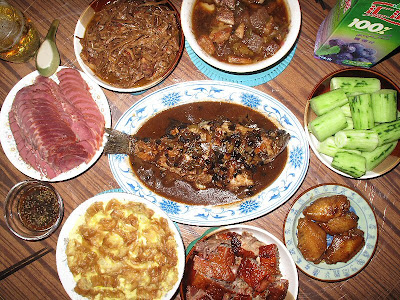 My brother in law, Cheng Hua, is an excellent cook, and he prepared both catfish (Pelteobagrus) and largemouth bass (Micropterus salmoides). I had my first noodlefish soup (that I can remember) and also noodlefish (Salanx chinensis?) topping a light omelette, and oven-baked Siniperca, as well as deepfried Sillago; witness also the split-head big-head carp head (Hypophthalmichthys nobilis). Freshwater fish generally do not taste much, and especially cyprinids tend to be of loose consistency. The trick is to marinate and prepare the fish whole (gutted, and gill-arches removed). 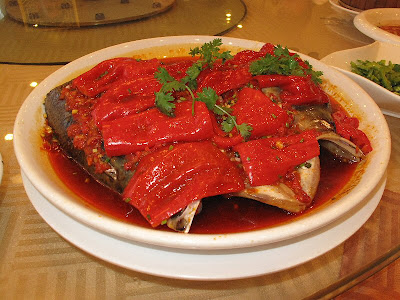 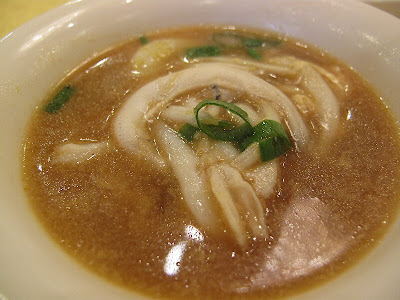 Shark fins? No, I have memories of boxes of shark fins from earlier visits, but this time did not see any. Perhaps a good sign, but shark fins were never cheap. Shark fin soup is excellent treat, but nothing humanity cannot live without. Thick chicken soup is equally fine. Perhaps, if chicken were to have their wings and feet cut off and still living bodies thrown to rot on the ground, chicken soup might take up competition of delicacy – or not? There will never be any shark farms to produce shark fins for soup.

So, what fish were we eating in China then. Largemouth bass (Micropterus salmoides) from North America, tilapia (Oreochromis niloticus, and O. aureus) from Africa, and pacu (Piaractus brachypomus) from South America, are very common. Traditional and new aquaculture species such as the bighead, silver, black, and grass carps (Hypopthalmichthys nobilis, H. molitrix, Mylopharyngodon piceus, Ctenopharyngodon idella), the common carp (Cyprinus haematopterus), the catfish Silurus asotus, swampeel (Monopterus albus) (a favored fish on this blog), and weatherfish (Misgurnus anguillicaudatus), are of course still common. 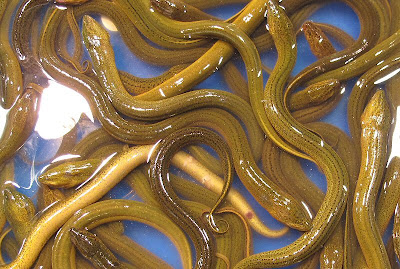 Chinese aquaculture strategy seems to be expand on cultured biodiversity rather than improving or adapting species already in culture. Not very different from the rest of the world, except that, interestingly, the rest of the world mostly did not have aquaculture traditions, and only one of the traditional Chinese aquaculture species has been globally adopted, i.e., the “common carp”. With the reservation that the carp cultivated in Europe is the local species Cyprinus carpio, whereas the Chinese redfin carp Cyprinus haematopterus is only almost the same. These two species have been dispersed worldwide by fisheries people totally ignorant of what species they have been dealing with. 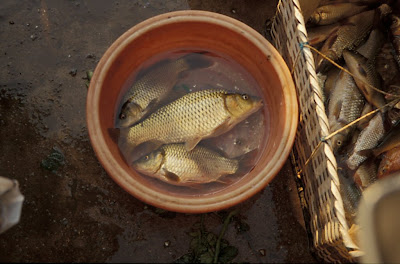 But I have to admit, at home, frozen tilapia (Oreochromis niloticus) imported from China, is a favorite dish. Tilapia is excellent meat. Is is not weird to eat, in Europe, African fish produced in China? And most weird of all: Why do the swedes, with all their water, eat aquaculture fish from the other side of Eurasia. When it comes to aquaculture, nothing makes sense.