The year is isn’t over, and the snow did not fall over Stockholm yet, so it may be a bit early to summarise the year. But it might be better to start early, not to end up in december 2010 summarizing 2009, and then it has to be piece by piece. Writing this, I am reminded of one of the most famous aquarium books, Aquarienfische in Wort und Bild, which was issued over a period of 30 years in instalments of a smaller number of sheets, and the authors were indeed writing continuously on it between 1932 and 1962. In the 1950s there were similar initiatives elsewhere in Europe, e.g., the Belgian Vissentlas, but I have not kept track of them. Also TFH publications tried, much later, to publish a loose-leaf edition of Exotic Tropical Fishes, and the German cichlid society sent out species descriptions with their journal supposed to be collected by the subscribers. Of course, this is in most cases an awkward way of publishing where the customer is the big loser. The following scenarios are possible:

Die Aquarienfische in Wort und Bild (there is also the corresponding Aquarienpflanzen) is an exception among the bad examples because it (1) terminated a long time ago, so all you can buy now is the complete book (€70-150 on eBay), and (2) it was actually quite complete in coverage, and especially the species descriptions were more detailed than anything in other contemporary aquarium books. I am actually not quite sure when it was published, but it seems it started in 1932, and went on till 1962, with Hermann Meinken (1896-1976) as the sole author after co-authors Maximilian Holly (*-*) and Arthur Rachow (1884-1960) long before had retired from writing. Die Aquarienfische in Wort und Bild was a highly influential work, the mother of all other European aquarium books.

That it wasn’t published after 1962 seems likely because the description of Brachydanio frankei, described by Meinken in 1963, is missing. Every other fish imported to Germany up till the late 1950s/early 1960s are there, and Meinken had a particular interest in danios.

Now we are getting to the point: Brachydanio frankei was, at that time, known only from aquarium specimens. It is still not known from the wild, as already pointed out in an earlier post about fish from nowhere. Meinken lists the following species of danios:

That is a very short list. (And by the way, Brachydanio is presently considered a junior synonym of Danio, and Meinken’s Danio are now in Devario; but they are all danios.) A much larger number of species of Rasbora are described in the same book. At present it looks to me that there are more danios than rasboras in the shops, but I may may be biased. 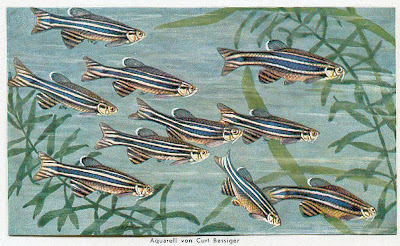 The most characteristic about Danio frankei is the colour pattern, which is golden with small brown or black spots. At the time that was quite remarkable because all known danios (listed above) were striped (except that the stripe in Devario devario is not so prominent, and Danio nigrofasciatus has spots on the abdomen. Over the time, no wild specimens of D. frankei appeared, and it has turned out rather certain that it is a colour mutation of the zebrafish, Danio rerio.

In the original description of Danio frankei, Meinken wrote (my translation from the German):

Shortly before the end of the year 1962, through my old friend Heinrich Grauel from “Vivarium-Bremerhaven”, my friend Diplom-Biologe Hanns-Joachim Franke in Gera/Thüringen, gave me  six captive bred specimens of a very handsome Brachydanio novelty with the request that I study the specimens, if possible identify them and give them a name. According to the information from Mr Grauel, at that time Mr Franke already had bred several hundred specimens of this species in his breeding tanks. Unfortunately the novelty was lacking a name.

Upon my immediate checkback concerning details about the importation and my notice that — in case the animals would represent a scientifically still unknown and undescribed novelty — a determination based on captive bred specimens would be unreliable because that could lead to mistakes, Mr Franke then most friendly told me that he had obtained the import specimens from the familiar and active Diplom-Biologe Stanislav Frank in Prague. Unfortunately, the place of capture was unknown also to Mr Frank. That the animals came from India was only a very weak consolation, because first all Danio and Brachydanio species come from India and the Indo-Malayan area, and second India is large, about several times larger than the previously undivided Germany. Mr. Franke, however, made the great sacrifice in the interest of science and nomenclature, killing four of his import specimens and sent them to me for examination.

Meinken then went on with a very detailed description, a lamentation of the lack of locality data, and finally, a long discussion about relationships. According to Meinken, D. frankei would be most closely related to B. tweediei (from Malaysia), a nominal species currently synonymized with D. albolineatus.

That did not stop other leopard danios from coming in. The first was Danio kyathit, described by Fang in 1998. The second was just described by me and Fang based on a large series collected by U Tin Win in the same region as D. kyathit, and we named it Danio tinwini.

Danio tinwini is spotted and the spot pattern is quite similar to that of D. kyathit, but not so much to that of the leopard danio. It is a much smaller species than either D. kyathit or the leopard danio, however, and external morphological characters suggest that it is more related to D. nigrofasciatus or D. aesculapii. It is indeed a remarkably small species. The largest wild male examined was 21.7 mm in standard length, the largest female 25.6 mm. That is almost as small as the smallest Danio species (D. margaritatus, 21.3 mm).  What provokes most thought, however, is the fact that the only two spotted danios, D. kyathit and D. tinwini occur in the same general area (but not syntopic), and are not closely related. Would we be surprised if D. frankei were found in northern Myanmar one day as well?

Danio tinwini lives together with a much more famous fish, Danionella dracula, the Vampire or Dracula fish. Much more we do not know about the natural habitat och accompanying species. You can read all the technical details about Danio tinwini in the Open Access original description.

Perplexion
*-* I cannot find any information about Maximilian Holly. I don’t even know where to start…?