Although claimed by the British, despite already being inhabited by other nations, to the outside world Australia was largely a Swedish discovery, by Daniel Solander (1733-1782), his boss Joseph Banks, and his captain James Cook, arriving to Botany Bay in 1770 for an eight day stop. That is when the last habitable continent on earth was finally incorporated in the world as we know it. Solander and Banks were essentially botanists, and did not mean anything to ichthyology, but anyway the terrestrial fauna and flora may be more special for Australia than the fishes, excepting then the remarkable Australian lungfish Neoceratodus forsteri discovered much later, described by Krefft in 1870, and the salamanderfish Lepidogalaxias salamandroides described as recently as 1961. Southern Australia, New Caledonia, and New Zealand should be marked for holding a group of fishes as interesting ever as the Araucaria trees, whose southern Gondwana distribution they track, namely the galaxiid fishes, with many species in this part of the world, and somewhat fewer in southern South America, and one in southern Africa.

Daniel Solander has a memorial by the shore of the first landing, erected by “countrymen” in 1914. I have to find out more details about this event. Because Solander lived all his professional life in Lindon, as a curator at the Natural History Museum, “countrymen” is ambiguous, but were likely Swedish. 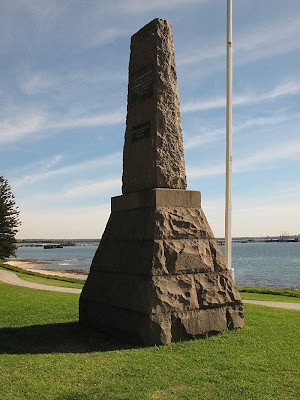 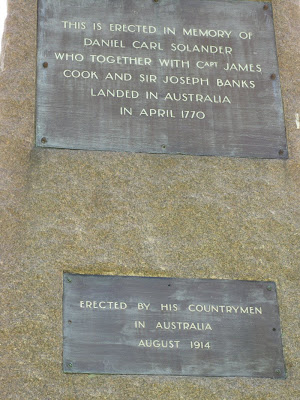 At the inlet to Botany Bay, the seaward sandstone extends into the Pacific as Cape Solander. That is where we today saw humpback whales blowing a little bit too far out to permit a good photograph. Cape Solander margins a whale sanctuary and there is a permanent whale observation post overlooking the sea at this point. 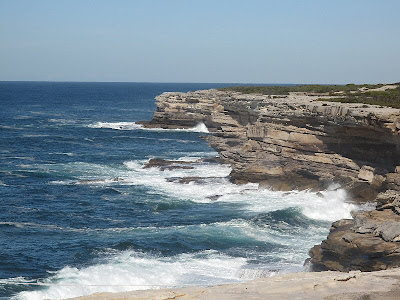 It is good to make history, to discover, and to learn. Too often, however, in the era of colonisation this led to the demise or otherwise bad treatment of the local population, and damage to local fauna and flora by the introduction of exotic species, as happened to Australia. Australia today is of course well aware of all this, and has a large number of natural parks and active conservation programmes.