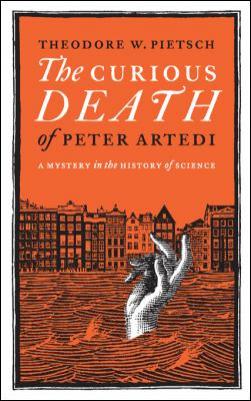 On the night of 27 September 1735 suddenly ended the life of one of the most significant founders of the science of systematic biology when Petrus Artedi, Angermannius, drowned in a canal in Amsterdam. At the age of 30, he was still not a man of fame, and did not leave wife, children or portrait. Only manuscripts, the ichthyological ones edited and published by Carl Linnaeus in 1738.

Since 1738 every scrap of information about Artedi has been carefully collected and arranged by ichthyologists and historians of science into a puzzle still full of lacunae. The big questions have been – who was this person? What would he have become had he lived on? Was Linnaeus really the genius, or was it Artedi? After all, Linnaeus is the baroque idol of the cultural wannabe élite. But in a scientific context he is but one in a web of masterminds continuously occupied with reconstructing the history of life on Earth.

In his mystery novel The curious death of Peter Artedi – a mystery in the history of science (222 pp., Scott & Nix, New York, 2010) Theodore W. Pietsch, ichthyologist, professor at the University of Washington in Seattle, tells the story again, this time in the hand of Carl Linnaeus, in Linnaeus’ characteristic egocentric, bombastic, voluptuous, but yet flowing and elegant fashion.

We already know how it ends, or do we? The curious death of Peter Artedi is a story about a crime (or is it?), an 18th Century mystery (or was it?), with all the information put together, with  the whole 18th Century  Western Europe baroque academia and naturalists as background actors in the drama of  the two Swedish student friends (or competitors?). One dead and forgotten. One glorified in eternal life. Or, why some of us cannot forget Artedi? Ted Pietsch has spent years on researching Artedi and Linnaeus, visiting the historical places and analyzing their publications and all the little documentation otherwise saved from Artedi. This book is his conclusion, and you have to read it. 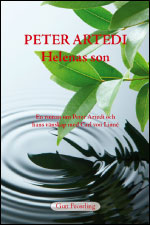 Artedi in love? In another novel, Peter Artedi Helenas son (Peter Artedi, Helena’s son), by Gun Frostling (202 pp., Nomen förlag, Visby, 2010),  Artedi on the run after an embarrassing experience with his father, takes in at a countryside inn. Suddenly he whispers to the innkeeper’s daughter Katarina Ersdotter, “We have to be careful, miss Katarina” …  The Katarina to whom he gives his final thoughts. Gun Frostling’s story is woven from the same fragmentary matter as all other Artedi biographies,  but gives him a real life on top of all the academic stuff, a real home, real parents, a loving girl, and spoken lines. And who is Gun Frostling? An author off the grid?

Beware, folks! Myths are coming to life here, in both those novels, fiction and facts creating a history of its own. Indeed, it may be time for the legend of Petrus Artedi to stand up against the icon of Linnaeus.

To conclude,  after all, scientists are people, human beings strong and weak in mind and heart as the wind blows this or that way. We have to remember that too.

Footnote: You can find those titles from practically any online book shop (in Sweden at least).

Some of you may have observed the excellent movie by Elizabeth Watson for the Artedi Symposium in 2005. It misses the Artedi part, however. Now, Elizabeth kindly made available also this critical drama. Petrus Artedi working at the waterfront, barefoot, quill pen in hand and on the whole rather charming and primitive. Starring Jonathan Ready in 18th century outfit worthy of any ichthyological master.

Swedish as we are, and I grew up fishing in Örnsköldsvik not many kilometers from Artedi’s birthplace in Anundsjö (many years later, though, he moved to Nordmaling before I arrived), we cannot simply forget the man who discovered systematics, the genus concept, and the descriptive method of Ichthyology, although everyone else seems willing to do so. The discussion goes on and on, did Linnaeus simply plagiarize Artedi? Ted Pietsch, American but from Washington state which is almost as cold as Sweden, has a new book out on the interaction between Linnaeus and Artedi, which will be given some lines here eventually. The Royal Skyttean Society, one of Sweden’s 18 noble academies, just published the proceedings of their Artedi Symposium in 2005, and in 2011 it is again time for the third Artedi lectures event.

To those who haven’t heard of Artedi, but are going to watch Elizabeth’s film: Petrus Artedi, born 1705, in Anundsjö, north Sweden, studied with Linnaeus in Uppsala, sharing interest in natural history and classifications. Both then travelled to the Netherlands to study and graduate. In 1735, Artedi drowned in a canal in Amsterdam. Linnaeus took care of his manuscripts and published them in 1738 as Ichthyologia, sive Opera omnia de Piscibus, which was a highly innovative and complete treatise of ichthyology. The fish taxonomy in it found its way into Systema Naturae. The film was shot in September 2005 on the bank of Edsviken Bay, on the premises of the Ulriksdal Palace, the first building dating to 1643, home to queens and kings, among them Adolf Fredrik and  Lovisa Ulrika (1720-1782), whose natural history collections were studied by Linnaeus. It is now the seat of Swedish WWF. For what we know, Artedi was never there, but Linnaeus was (me too), and you can feel the 1700s in the bare branches of the trees, the water’s reflections, and Artedi’s frozen feet.